Long before The Heinz Endowments established the Just Pittsburgh concept as a defining theme of its grantmaking, the foundation had a commitment to equity and justice that was reflected in its work. One example was the African American Men and Boys Initiative (AAMB), a decade-long program that began in 2007 and was dedicated to increasing educational, economic, social and leadership opportunities — including those promoting media skills — for African American men and boys in the Pittsburgh region. The initiative used an asset-based approach in working with the African American community to create improved life outcomes for this population.

An AAMB staff task force was led by Carmen A. Anderson, then-senior program officer for the Children, Youth & Families Program and currently the Endowments’ director of Equity and Social Justice, which oversees work that incorporates and expands upon the principles developed through AAMB and other foundation initiatives. The task force also collaborated with a community advisory board, whose members counseled staff about direction, possible action, potential partners and advocacy opportunities. While AAMB has ended as a separate initiative, its key priorities have been embedded in the Endowments’ strategic areas, ensuring that African American men and boys remain an important focus of the foundation.

"Portrayal & Perception: African American Men & Boys" is a three-year documentary series project supported by The Heinz Endowments and produced by WQED Multimedia. The television episodes feature individuals and organizations in the Pittsburgh region that are challenging common images of black men.

Portrayal & Perception 2013: This year’s series features segments on black men in media or medical careers as well as those who are civil rights advocates or teachers either within or outside of the traditional classroom.

Portrayal & Perception 2014: “Fine Arts and Artists,” explores some of the challenges and accomplishments of African American men who have pursued careers in the fine arts fields of symphonic music, painting, playwriting, ballet and poetry.

Portrayal & Perception 2015: Host Chris Moore and a group of local experts gather for a conversation about the current issues facing African American males from a societal and legal perspective.

Crossing Fences 2012 – This first year of the project brought together youth and men in Hazelwood, the Hill District and Homewood.

Crossing Fences 2013 – This year included recorded conversations between youth and men from Hilltop, McKeesport and the North Side.

Crossing Fences 2014 - The third year of this project focused on interviews and discussions between youth and men in Wilkinsburg, the neighboring communities of Stowe and McKees Rocks (referred to collectively as Sto-Rox), and the East End section of Pittsburgh.

Crossing Fences 2015 - For its fourth year, "Crossing Fences" went to Braddock, Homestead and Sheraden to have local youth find out about the lives, goals and achievements of men in their communities.

Crossing Fences 2016 - The fifth year of this project focused on conversations between youth and men in the communities of Garfield, Northview Heights and Penn Hills.

To promote more well-round depictions of black males, The Heinz Endowments is supporting the Game Changers Project, a national program that selects local aspiring and experienced young filmmakers to shoot “micro-documentaries” about black men in their communities who are “changing the game” in areas such as education, justice, entrepreneurship and fatherhood.

Through support from The Heinz Endowments, Pittsburgh is one of several U.S. cities participating in the BMe Community national network. BMe places a spotlight on the many ways that inspirational black men bring out the best in their communities and help their cities create a more attractive image. Since 2012, BMe has awarded more than $2 million to men who are deeply committed to the well-being of others and are making a positive impact on communities across the country.

The Heinz Endowments’ investment in programming to improve opportunities and outcomes for African American men and boys includes the Black Male Leadership Development Institute at Robert Morris University. The institute provides leadership training for African American teenage boys during a week-long residential program in the summer and mentoring and other educational experiences throughout the year. It is co-sponsored by the Urban League of Greater Pittsburgh and also receives funding from The Buhl Foundation.

Improving Media Coverage and PublicPerceptions of African-American Men and Boys. As a result of its research on media coverage and public perceptions of African American men and boys, The Opportunity Agenda has developed guidelines for groups seeking fairer portrayals. Recommendations include focusing on “full and accurate” depictions of black males rather than “positive” or “negative” coverage and encouraging in-depth investigations of systemic causes of unequal opportunity, which ultimately harms the entire society 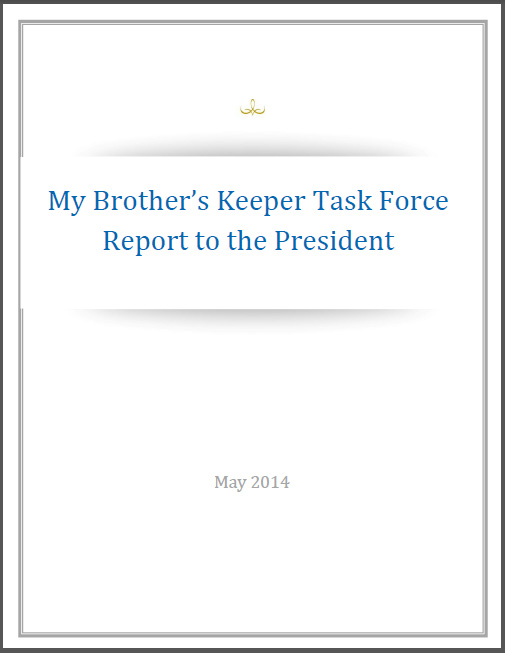 My Brother’s Keeper Task Force Report to the President. In this first report on the My Brother’s Keeper Initiative, launched by President Barack Obama in February 2014, the supervising task force provides an evaluation of the first 90 days of the effort and offers an initial set of recommendations for improving life outcomes for African American men and boys. Calls for change include better implementation of proven strategies and investment in innovative programs, addressing areas such as family support, education and employment.

Poverty and Race through a Belongingness Lens. Civil rights scholar john a. powell looks at ways to change poverty narratives and structures that can help break our complicity with this seemingly intractable problem. This includes examining how race is a significant component in understanding and addressing poverty.

The executive summary of “Cultural Responsiveness, Racial Identity and Academic Success: A Review of Literature” provides an overview of the approach and findings of the study.

Cultural Responsiveness, Racial Identity and Academic Success: A Review of Literature, June 2009. This Endowments-commissioned report looks at educational strategies that use students’ cultures and the role of ethnic identity in promoting resilience and academic success. Researchers Mary Stone Hanley of George Mason University and George Noblit of the University of North Carolina, Chapel Hill, reviewed literature on four concepts – culturally responsive pedagogy, positive ethnic socialization, resilience and academic success – and examined research on the connections among them, with an emphasis on arts programming.

The Impact of Racial Trauma on African Americans, Feb. 16, 2010. Pittsburgh psychologist Walter Howard Smith, Jr., Ph.D., prepared this paper for the Endowments’ African American Men and Boys Advisory Board to provide a psychological perspective that uses a trauma model to understand the impact of racial experiences on how African Americans function in the United States.

“Joaquin’s dilemma” - Understanding the link between racial identity and school-related behaviors. Pedro Antonio Noguera, a professor in the Steinhardt School of Education at New York University, examines how students’ growing awareness of racial identity in adolescence can affect their academic performance as they seek peer acceptance. Noguera also recommends strategies to educators on how to promote both positive racial identity and academic achievement among African American and Latino high school students.

The Trouble with Black Boys: The Role and Influence of Environmental and Cultural Factors on the Academic Performance of African American Males. Urban education expert Pedro Antonio Noguera analyzes how environmental and cultural forces influence black males’ perceptions of schooling and how those perceptions influence their behavior and performance in the classroom.

Breaking Barriers: Plotting the Path to Academic Success for School-Age African-American Males, 2008. Ivory A. Toldson, a senior research analyst at the Congressional Black Caucus Foundation and an associate psychology professor at Howard University, looks at results from four national surveys to explore factors that improve educational outcomes for African American males. The areas examined were family, school, social and environmental conditions, and personal and emotional factors.

Breaking Barriers 2: Plotting the Path Away from Juvenile Detention and Toward Academic Success for School-age African American Males, 2011. In his second national “Breaking Barriers” study, Professor Ivory Toldson analyzes the responses of 4,470 school-age black males from a range of backgrounds to a survey about their life circumstances and choices. The report’s goal is for teachers, school administrators, families, community leaders and policymakers to use the findings to create educational and social environments that will encourage African American males to achieve higher levels of academic success.

Why We Can’t Wait - A Case for Philanthropic Action: Opportunities for Improving Life Outcomes for African American Males. The Ford Foundation commissioned analysts Marcus Littles, Ryan Bowers and Micah Gilmer to highlight the efforts of researchers, direct service providers and policy advocates working to turn around the life prospects for African American young men. It provides a representative sample, rather than a complete listing of state and national projects focused on policy, practice and knowledge production.

The Consequences of Structural Racism, Concentrated Poverty and Violence on Young Men and Boys of Color, 2011. Carol Silverman, Michael Sumner and Mary Louise Frampton, researchers with the Thelton E. Henderson Center for Social Justice at the University of California’s Berkeley Law School, examine the structural and institutional elements that studies indicate are the true root causes of violence among boys and men of color.

"The Money Behind a Push to Bolster Black Male Leaders Across the U.S." by Kiersten Marek, Inside Philanthropy