We Are the Cure 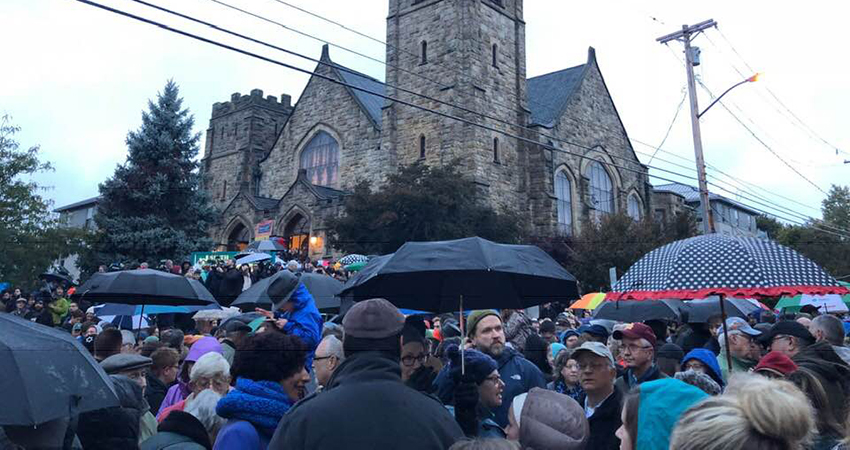 Early in Fiddler on the Roof, the character Tevye asks God, “Send us the cure. We’ve got the sick-ness already.” On Saturday both sickness and cure came home to my neighborhood of Squirrel Hill in Pittsburgh.

The sickness came, as the entire country now knows and will too soon forget, in the form of a man filled with anti-Semitic hatred and armed with weapons of war who in his dark and meaningless rage slaughtered eleven innocents attending services at Tree of Life Synagogue.

For much of that long terrible day, and lingering still, all I could sense was the sickness. You feel it in your bones, see it reflected back in the eyes of your friends and neighbors: the grief, the dread, the helplessness, the heavy sense that this is not the end.

It was natural but pointless to ask how this could have happened. We know, we knew immediately. This ancient hatred, which America once fought a war to stop and my Dutch grandmother nearly died opposing, has been given new license in today’s America, along with so many other hatreds, so many vile new ways of beckoning old evils.

But all through the day, slower to seep into consciousness, the cure was awakening all around us. It was there almost instantly in the astounding bravery and professionalism of the police officers who rushed in and prevented so many more from being killed. Four were wounded, and all were willing to risk their lives for people they likely had never met.

It was there in the immediate, intense, heads-down, arms-wide focus of leaders in the Jewish community who threw themselves into tending to distraught families, working with police and gathering community, Jewish and non-Jewish alike. If you live outside this town, the names of Jeff Finkelstein, Brian Schreiber, and Ron Symons, to mention just a few, will mean little to you. But to me they and others unnamed are friends who have become something more now: quiet heroes we will always want at our community’s side.

It was there in the calm presence and personal honesty of public officials—Governor Tom Wolf, County Executive Rich Fitzgerald, Mayor Bill Peduto, Congressman Mike Doyle, and many others—who somehow captured both our anguish and our need to be consoled without ever making it about themselves. During a vigil Sunday night, one Pittsburgher tweeted that Peduto spoke with such moral clarity he was “Mayor of America right now.” And that was the point for all of them: they rose, in our hour of need, as the best leaders always do, to being everyone’s leader, embodying the noblest part of Pittsburgh’s character—how we come together in moments like this.

It was there in the students from Taylor-Allderdice High School who organized the vigil that brought our community together on Saturday night. It was there in the diverse thousands who stood in the drizzling rain at Forbes and Murray, who prayed and sang and hugged and wept and found strength and solace in each other. It was there in the student whose voice trembled as she vowed her community would not be terrorized by this act of cowardice, and by another who shouted, “We are still Squirrel Hill.” It was there in the small moment when the Reverend Glenn Grayson, who lost his own son to gun violence and suffers that wound ripping back open with every new act of hate, still found the strength to lead a little group of us in prayer.

Everywhere I have looked since Saturday morning, it has been there. People searching for ways to help, leaping into action, lighting candles, bringing food, organizing. There have been more offers of help than capacity to respond, so we funnel our caring into planning gatherings, checking on friends and neighbors, lingering in conversation, holding each other’s silences.

Sunday night’s vigil, vibrant in its celebration of Judaism and Jewish life, broad in its embrace of the broader community, offered one of the most inspiring collection of speeches I have ever heard. The theme at the heart of every single one was that love triumphs over hate, and will again.

But this we must remember: Not by accident. Not without intention. And not without action.

There is a context to this. We are becoming so inured to these moments that we risk forgetting the totality of what is happening around us. Violent, right-wing extremism is on the rise in America. Just now, in the days before this attack, a white supremacist murdered two elderly black shoppers at a grocery store in Louisville. Another white supremacist mailed bombs to multiple current and former elected and government officials and wealthy donors critical of the President. The tale of terrorism in America today is the tale of armed white supremacists increasingly emboldened to commit acts of brutal violence.

It is common now to hear the sentiment that “we all” should tone down our rhetoric, and there is no question the language of hate and divisiveness should have no part in our civic dialogue or in our hearts. But if that is true, and it is, then we must be willing to courageously call out and demand better of leaders who dogwhistle acts of violence for the cheap thrill of a laugh line at a campaign rally, who peddle in racist and anti-Semitic conspiracy theories, who draw moral equivalency between Nazis and the protesters who oppose them, and who use empty “thoughts and prayers” as a cynical device to ward off sensible gun laws.

There is a sickness in the human heart, and love is the cure. Coming together in community is the cure. Embracing each other in all our differences as one people—that, most assuredly, is the cure. But love comes with accountability. It demands more and better of us than indifference and silence.

“We see the world not as it is,” the Talmud teaches, “but as we are.” The gunman who took so many lives on Saturday saw the world not as it really is, not even remotely, but through the hellish lens of his own twisted fantasies. We can only create the alternative by being the alternative—by being the tolerant, loving, inclusive and, yes, mutually accountable people we aspire to be and know we must become.