The Dawn We Seek 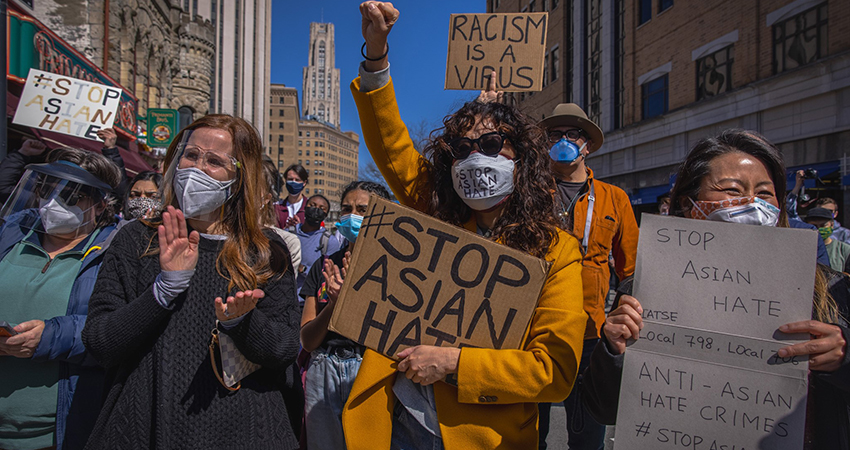 The Talmud tells a story of a rabbi who asks his students how they can tell when the first moment of dawn arrives. They offer conventional answers about being able to distinguish one tree from another or this animal from that. The rabbi shakes his head and says, “You know the first moment of dawn has arrived when you look into the eyes of another human being and see yourself.”

In the wake of the shootings in Atlanta last week, I was struck, again, how very far from dawn we feel right now.

Whatever else we may learn about the shooter (and frankly I don’t really care to learn more), we already know the unsurprising essentials. He saw women as objects for his pleasure or disposal, and fetishized Asian women yet alleges no racism in his viciousness. (Has there even been a more absurd expression of the “I am not a racist” trope?). He felt entitled to “eliminate” other lives that displeased him, sought salvation in the barrel of a gun, and was chillingly blind to the humanity in the eyes of his victims.

He did not see anything of himself peering back. He saw only targets. Not God’s fellow creatures, human beings like himself, just aliens, demons, enemies.

That fatal unwillingness to glimpse himself in the eyes of another must not be dismissed as the twisted psychopathy of a mass murderer on a rampage. It is far too common for that.

It is the essential ingredient in all racism and racist violence, and in all misogyny and violence against women. It is how hate crowds out compassion and rationalizes cruelty, subjugation, and the suffering of others.

In this country, it is the oxygen that keeps the fires of white supremacist hatred burning. It is what makes it possible for a supposedly God-fearing nation to slaughter Native Americans, enslave Africans, perpetuate slavery over centuries, embrace oppression as official policy, condemn the poor for their pain, cater in vicious stereotypes, and then to feign mystification at the eruptions of scapegoating violence that inevitably and perpetually follow.

Could any serious person really have been surprised about what happened in Georgia? It was an aberration neither as an act of anti-Asian violence nor as a mass shooting, neither as an attack on women nor as an expression of a society struggling with its own highest values.

As commentators far more knowledgeable on this subject than I have pointed out, the current wave of anti-Asian violence has a long, sad history in America. But it has been fed over the past year by irresponsible political leaders and media blowhards eager to cash in on hate and fear by assigning the pandemic ethnic and national roots that are transparently malicious.

And that has come against the backdrop of four years of these same alleged leaders shamelessly stoking the flames of white nationalism, stirring the pot of right-wing extremism, scapegoating immigrants, invoking the language of war, and seeding paranoia against anyone whose identity or vision broadens America into the fullness of its ideals.

It was telling, in the wake of the Atlanta murders, to hear apologists double-down on the flippant mislabeling of a pandemic that our leaders failed to address, and a U.S. Congressman cavalierly invoke a lynching metaphor as a positive. Hateful words normalize hateful ideas, and hateful ideas reap bitter consequences.

The poet William Blake wrote, “The man who never alters his opinion is like standing water, and breeds reptiles of the mind.” So it is when we become mired in fear, anger and distrust of those we label “other.” In that festering swamp we see monsters where we should see possibility. We lose the gifts of learning and growth that come when we look at the world through another’s eyes.

There is a saying that it is always darkest before the dawn. Like many, I would like to believe that now, that in the context of a new social consciousness and resurgent racial justice movement, perhaps we are on the cusp of a better and more inclusive era.

Only if we make it so. That starts, in grim moments such as this, with condemning the violence and the fearmongering, racism, misogyny, divisiveness, and hatred that underlie it and ultimately fuel it. I do that again now.

It continues when we demand language, behavior and policies from our leaders and from ourselves consistent with our hopes for a society where all are truly welcome, represented and free. Philanthropy has a role to play in that, too, which in our work we will continue to try to own.

The rabbi’s point in the story from the Talmud was that dawn arrives not when we can see well enough to make distinctions and glimpse our differences. It comes when we look beyond them and see our connectedness.

The dawn we seek does not come about on its own, as the rising of the sun routinely yet miraculously turns night to day. This new day requires an act of volition, a willingness on all our parts to build community and to demand for others the same fundamental rights and opportunities we expect for ourselves. It is to that work that we recommit ourselves now.